I had a customer contact me recently about a custom tile shower installation.  As you will see in the pictures below, his shower had a very poor design which caused mold growth.  The shower was completely enclosed by concrete blocks on four sides and had a small shower door to enter and exit from.  When the shower door was closed after use, the moisture would be trapped and that caused the ceiling to grow mold.  Because the shower was fully enclosed, it also had a very claustrophobic feel.  The last major problem this bathroom had was carpet on the floor. If you have read any of my other posts regarding carpeting a bathroom, you know my feelings on that.

Before we start your custom tile shower installation we fix the problems in the bathroom in several steps.  The first thing we did was to protect the rest of the house from the dust that would be created by cutting out the block wall to make room for a much larger shower door (5′ bypass door).  Once the block wall was removed and the mess cleaned up, we had to prepare the cut surface for the new tile installation. By removing the block wall, we would also make the shower open from curb to ceiling to get rid of the claustrophobic feel.  Inside the shower we installed four custom shelves for storage, used stainless bull-nose tile edging to match the shower door, installed a new ceiling and tiled the remaining bathroom floor to match the shower tile.

As you will see in the pictures below, there is no comparison to what the bathroom is now, from what it was before. 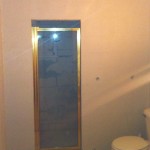 This is what the bathroom used to look like.  A very small shower door that did not provide any room to get into or out of.  With the fully enclosed wall system it definitely felt very tight as well. 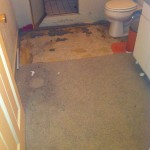 The carpet was halfway removed when I got there to give an estimate. The carpet was always wet from the shower not providing a comfortable place to dry off. Because there are several people showering a day, the carpet did not have time to dry out between uses. Save yourself a headache and don’t have carpet installed in a bathroom (if you already have carpet installed, have it replaced). 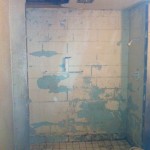 The shower door has been removed along with most of the block wall it was attached to.  You can see how big the shower is (it’s actually a very comfortable 32″ deep on the inside and nearly 6′ long).  Because the moldy ceiling fell down during the demolition, I don’t have a picture of it.  Before we can begin tiling the walls, we will have to scrape the loose paint off the remaining block walls and do a little more prep work.  Check out our post “Waterproof your shower ” for our preferred waterproofing method. 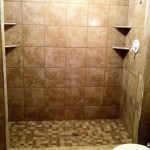 The ceramic tile has been completely installed and grouted!  Notice the four corner shelves along the back wall for soap and shampoo storage.  There is also a 2″x2″ floor tile installed on the floor instead of the old slick 4″x4″ tile.  We also used metal trim for the bull-nose that matches the finish on the shower door. 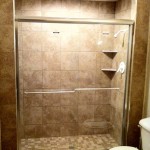 Completed shower with the new door installed.  You will also notice in this picture the outside walls of the shower have been tiled as well.  Although the floor was not pictured, the same 12″x12″ tile was used on the bathroom floor and all the grout lines line up right into the shower wall.  Call EJ Flooring for all your custom tile shower installation needs.

Safely Removing A Fiberglass Shower From Your Home

Properly Installing Tile Assemblies – What You Need To Know

Eric Blumer is a Certified Tile Installer servicing all of Mid-Missouri. Properly installed tile will last a lifetime, it's Eric's desire to show that qualified labor is out there. Following industry standards helps to ensure that your project won't fail.